This is way too important to not post. Hollis's brain surgery blog has been inactive for 3 years, but this got my attention, and I've got to say something. "Retard". How many times have you heard or even used that word yourself? Here's the ever delightful Ann Coulter, in her Twit account (yeah, I meant that), using the "R" word, thinking she's being cute? Or what exactly? Ann Coulter - you may think it's innocuous. You may think you don't hurt anyone by carelessly throwing this term out. My child may not understand "retard", but I certainly do. It's like "cripple". Or "slow". Or any of the other terms that civil people all over the world have learned not to use. Your attempt at "funny" just shows what a hopelessly desperate, cruel, elitist, unimaginative person you are. Hope you enjoyed reliving your days as a playground bully once again. 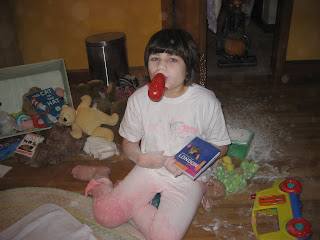 We want to thank all our family and friends for supporting us throughout this very challenging year, and for always being our rocks. Thanks to her doctors, teachers, therapists and caregivers for all that you do and have done for Hollis.
On a lighter note, I can't think of a more appropriate conclusion to this blog than to show Hollis and her best: as the mischievous little imp she always has been. She emptied an entire bottle of powder in her room while she was playing this morning, and Mom and Dad were only four feet away, in the other bedroom, thinking how nice it was she was playing so well by herself. She is always teaching us lessons about how creative she can be while she has some "alone time".
Thank you all for reading, and I hope that it has been both informative and a bit entertaining as well.
Posted by Hollis at 9:11 PM 2 comments: 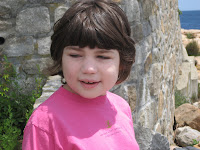 What a remarkable year it has been. One week from today, Hollis will be 1 year post-hemispherectomy. She has only had 8 seizures (that we have seen) since that time! That was as many as she would have in a day, with meds, a vagus nerve stimulator and other therapies. We have been so fortunate that this surgery has been such a success. 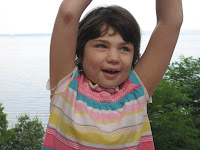 After July 11, 2009, I have decided that I will not update the blog any longer, because it was meant to follow my little girl's journey through the surgery and recovery process. At a full year, the neurologists say that the healing process is complete, and so my journey of documenting all of the anticipation, fear, relief and joy will be complete as well. Thank you for reading it, and I hope that it helps others who are going through similar challenging experiences.

Hollis received a swing from the human services organization Fidelity House, to help with some of her sensory needs and to be used as a calming tool. She loves it! Fidelity House is an organization that helps developmentally disabled people better participate in their families and the community by providing consultation, education, and other support. This swing is just one of the many items they can provide: we've been to a behavioral crisis intervention training class, they have had an entire movie theater showing "Up" made available for DD folks and their families (movie theaters are not an easy thing for a kid like Hollis to act appropriate in), and they have other events and classes throughout the year.

We got the swing partially as a result of a sensory integration evaluation that the Department of Mental Retardation conducted a few months ago. Many kids with developmental delays and autism spectrum disorders have behavioral issues that can be related to how they process sensory information. Hollis has always had some sensory integration issues, in which she presents as sensitive to light touch, but prefers stronger "input", and she can be overwhelmed by busy environments with a lot of visual and auditory stimuli. If she gets too much of this stimulation, she can go off on a behavioral bender, sometimes becoming very aggressive, or withdrawn, or conversely, supercharged! Sometimes she seeks out a lot of stimuli, hurling herself against a couch, repetitively, banging her head, or sticking her fingers in her eyes. After the sensory integration assessment, the swing was recommended as one therapeutic method to give her appropriate sensory feedback, and to soothe her before she gets to the point of a behavioral breakdown.

At the butterfly garden 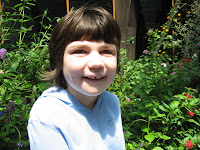 Daddy post: As Jessica has mentioned, we have been struggling with Hollis' behavior over the last several months. Most days I come home and would get a punch or kick from my daughter. I felt like I didn't know who my daughter was anymore. But recently, we have started to see some improvements in her behaviors with today being the best yet. We went to the Butterfly Place in Westford and Hollis loved it. She was smiling and laughing, walking around without hitting me or other people and even giving kisses. Her behaviors are still inconsistent from day to day and I don't know what's exactly changed to make her start acting better. One piece of the credit has to go out to her school, the Northshore Consortium which implemented a new behavior plan about a month ago which seems to be getting results. I never know if this will last or what the next challenge will be, but today it was just nice having my daughter back.
Posted by Hollis at 9:49 PM No comments:

No new tale to tell

Things have been rolling along a similar path since my last post. Still struggling with behavior issues, taking a step forward then one back. We're working hard with school to figure out strategies to help avoid the aggressive behavior, and how to deal with it when it happens. Hollis always manages to be a step ahead of us just when we think we have a plan in place! Other than that, health has been good, growing like a weed, and just getting to be a very big girl!
Posted by Hollis at 10:38 PM No comments:

Back to the drawing board with behavior

We had a fun Friday (insert sarcastic tone here). Hollis was a behavioral nightmare all last week and it came to a big frothy head on Friday. She wouldn't eat. She wouldn't drink. She would hit, scratch and bang her own head. We don't like any of these choices. She also ended up with a low grade fever, so we determined the best course of action was to see if this behavior was related to an illness.

Brought her to the pediatrician, and Hollis beat the living daylights out of me the entire time we waited (a grand total of about 10 minutes). Continued the beatings while I explained to the doctor what was going on. As I was trying to corral the fists of fury, Hollis made her way over to the doc and belted her! Lovely child. The doctor then said she wasn't going to be able to do an examination on her in this state, and sent us to the emergency room where they could sedate her if necessary to get the examination. Oh goody!

Off to the ER we went, fully prepped for an awful time. Daddy joined us shortly after Hollis and I arrived. For entertainment, I ordered up a blood pressure cuff, coincidentally from an old childhood friend who works at the hospital, since I've discovered that Hollis thinks these things are hilarious. The ER doc was fully prepared for a wild child, courtesy of a phoned in warning from the pediatrician, but of course, Hollis decided she was going to be sweetness personified. After her examination determining that Hollis had no fever, no sign of strep throat or ear infection, we came to the conclusion that it was side effects from her seizure meds and the lack of behavior meds that were making her so aggressive, irritable, self-injurious, and generally miserable. A personal consult from her neurologist who came to see what the hullabaloo was all about confirmed our suspicions.

So, the bottom line is, if it ain't broke, don't fix it. We went off her original behavior med, Risperdal, which was very effective, but we were searching for something with fewer side effects. What we ended up with was trying a new med, Abilify, which turned her into Godzilla. We all agreed after this failed venture that Risperdal was just dandy, and we'll just stick to what we know.
Posted by Hollis at 9:20 PM No comments: