Having fun in the bathtub 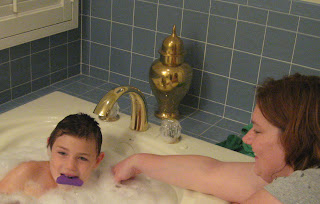 First, let me get the important stuff out of the way: Hollis hasn't had any more seizures since my last post (yay!). The docs say that it does happen, but they aren't concerned that they didn't make the full disconnection with the hemispherectomy. Her stroke was so large that there are probably damaged areas even on the "healthy" side of her brain, so it's plausible that there could be some electrical misfiring coming from there. Her neuro upped her Topamax dosage, and we'll just wait and see what happens. We're just happy that it was one: typically when she'd have tonic-clonics she would go into a cluster of them that could last all day.
We're down visiting Grandma and Grandpa, and Hollis had a great time taking her bath in their jacuzzi tub. Here's a picture (with a rare Mom sighting, because I'm usually the one behind the camera). We're trying to keep her from destroying their house too: she broke a light in half at our house on Thursday, so her behavior hasn't improved much. More on that in my next post.
Posted by Hollis at 7:55 PM