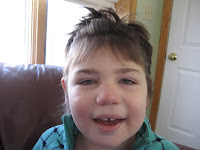 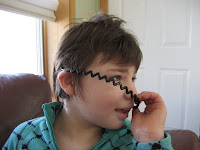 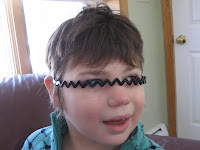 We're working with the hair growing out phase. Hollis only had one side of her head shaved for her surgery, so it has been growing in unevenly, but we've been cutting the unshaved side to make for some kind of style since the summer. I've decided it's easier to have her hair longer, one, because she hates having her hair cut, and two, she has cowlicks that are impossible to tame. She used to be fine wearing ponytails and barrettes when her hair was long, but now she's decided she can't stand them. Witness the attempt of a putting a headband on her, and the subsequent goofiness that followed.
Posted by Hollis at 12:44 PM