Gloucester in the rain 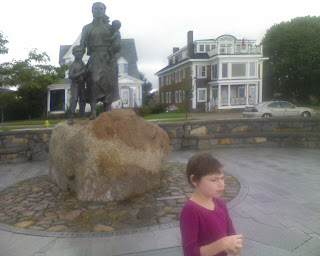 On Tuesday, Hollis and I went to Gloucester to walk around a bit. Of course, on our way there it started to rain, as it has been doing quite often these days. It was a still a nice outing, despite being a little soggy. Hollis has been asserting her independence while walking lately. I think she now has the confidence that she isn't having seizures, so she feels she can run freely with no parent supervision. That's fine in many circumstances, but she doesn't really understand the concept of not darting into traffic or jumping off a seawall to get to the ocean. I tried to restrain her, and she kept on pushing me away. She is definitely becoming quite a containment issue. Here she is at the Gloucester Fishermen's Wives' Memorial and walking around the seawall. It is a beautiful area, and a very poignant reminder of how dangerous the fishing industry is. 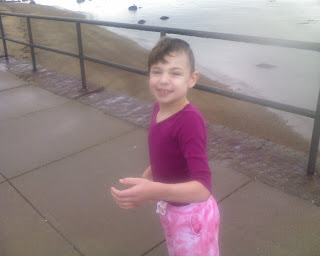