Hollis is really starting to act more like herself today. She's singing, throwing things, giggling, smiling, imitating sneezes and giving kisses. She has also stayed awake for three consecutive hours, as long as she has been able to since the surgery. Hollis was very pleased to knock Mom on the head with her ball, so I thought I'd share the joy of that in this video.

Hollis is now laughing! She was chuckling at Daddy and throwing stuff at him (very typical Hollis behavior). Everyday, a little more progress!
Posted by Hollis at 8:41 PM 1 comment: 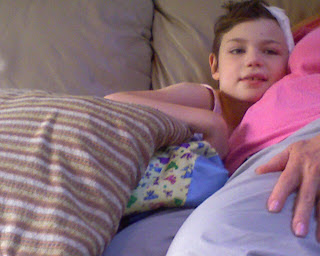 Hollis smiled for the first time today since the surgery! She smiled in the car, and a couple more times when Daddy started tickling her. We managed to catch it on the camera phone. She also ate a bit more muffin, and stayed awake a bit longer: a total of about 4-5 hours, but not consecutive. Healing is hard work! She also gave a little shake of her leg while laying on the floor to "dance" to Peter and the Wolf. Lots of hard work today, and lifted spirits!
Posted by Hollis at 8:33 PM 2 comments:

How Dunkin Donuts saved our family 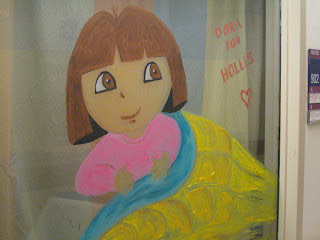 Today, despite being the homecoming, was a "down" day for Mom and Dad. Hollis was not eating, under any circumstances, and wasn't interested in drinking either. She slept through most of the day, and when awake, was very angry with everyone. We got to about 6:30, and decided to take her for a stroller ride, which again, was not particularly well-received, but she caught sight of the car, and pointed, indicating that she wanted a ride (a pre-surgery favorite activity).
We took a short ride, and stopped at Dunkin Donuts to get Mom a coffee (another pre-surgery favorite), and we also got Hollis a blueberry muffin, in hopes it might entice her. She grabbed the bag from Daddy, and started digging in, and then pointed to the coffee (yes, my 8 year old loves coffee, and I'm not ashamed to admit it). It was such a huge thing to get her to eat, and a relief for us!
She was exhausted by the time we got home, so we put her to bed. At 8:00 she was due for more meds, so I gave them to her and said how happy I was to have her home, and asked if she was happy to be home: she responded with "Yay", and I just broke down into tears. It is such a relief to see even the small parts of Hollis's presurgery personality emerging bit by bit. The stress of seeing her so weak and unlike herself has been excruciating. Her recovery is coming along slowly, but it is definitely moving in the right direction.
Here is a video of Hollis with the music therapist as referenced in previous posts. The pictures are one of the windows that Grandma decorated for the 2 rooms that Hollis stayed in. I think Children's hospital wanted to hire her! The other picture is Mom and Hollis dancing to "Holly Holy" by Neil Diamond at the jukebox last night. 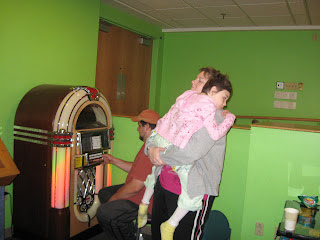 We're home! Hollis is still feeling very tired and nauseous, but we're all happy to be home to continue her recovery. Before we left the hospital, we had to prove to the physical therapist that she didn't lose any functionality, so we had to walk up some stairs. She didn't want to, but she did it: if I was feeling as bad as she is, I wouldn't either. We're still getting settled in, so this is short, but I'll try to update a little later. Yee-haw!
Posted by Hollis at 1:21 PM 2 comments:

Children's Hospital in Boston has a very nice garden area within its grounds. We took Hollis for a walk in the afternoon and she wanted to go out of her carriage to sit in the grass. She seemed to enjoy being outside. 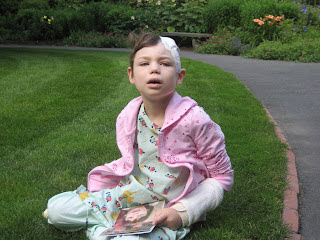 She makes good progress physically. Hollis walked a little bit more this afternoon, drank a little and ate 3 potato chips. Our goal tomorrow is to try to get her to eat and drink more. If she does, we might be getting out of the hospital soon. She's been running a low grade fever but that has been managed with Tylenol. The nausea was better today, although Hollis was given more medicine to control it. We will give her less nausea medicine tomorrow and see how that goes.
We haven't really seen her personality come through yet. She hasn't said any of her words and no smiles or singing yet. From what we understand though, it can take some time before that comes back. I can't wait to get a kiss again from my daughter.
One last thing and I hesitate to post it because it feels like a jinx but I thought it would be good for everyone to know that so far we have not seen any seizures. It's still early and the doctors tell us seizures can persist after the surgery 6-8 weeks, but we have not seen any. Let's hope that continues!

Hollis stood and walked with assistance today. She took about 5 steps to the door, and she's sleeping it off now. Still feeling yucky, but we're trying to manage it with meds. We also had a music therapist come by and she sang her to sleep. Dad may put pix on later today.
Posted by Hollis at 12:55 PM 2 comments: 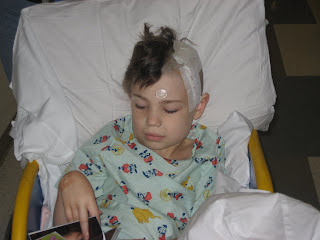 Today was Hollis's first outing from her bed since the surgery. Though I think she enjoyed the change of scenery, I believe she was a bit motion sick because she ended up throwing up the Sprite she had drunk earlier. She was very happy to see Katie and Alan visit again today. She also loved her trying out the blanket her Auntie Kim made (on her lap). 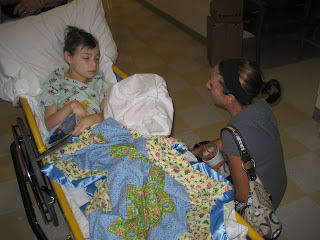 On the final report from Daddy tonight, Mom sprung into instant tears: she was watching her Elmo video, and signed "more" when it was done, and sang a few notes of Elmo's song. Off to bed for now...thank you all for your prayers and good wishes!
Posted by Hollis at 9:25 PM 1 comment:

Tube out, getting PT 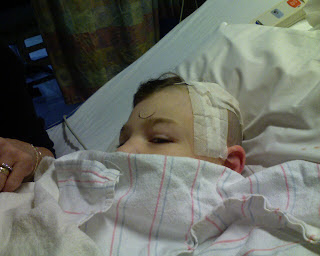 Hollis had her EVD drain removed this morning, which means she no longer has any drains in her head. The EVD went directly into the brain ventricles to remove excess fluid caused by the irritation of the surgery. So, now, she can move around a bit more freely in bed and the PT was going to come and work with her this morning. More updates later tonight when Mom is home again.
Posted by Hollis at 11:11 AM 2 comments:

Transfer out of ICU 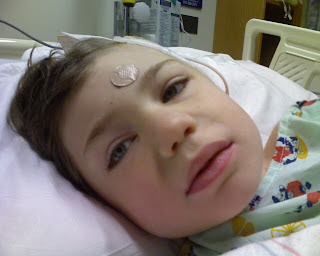 So Hollis was transferred out of ICU today. She was more alert more of the day and waved bye-bye to a cute male IV nurse. Her function of her arms and legs appears to be about the same but she hasn't gotten out of bed yet and there will still be some time before we try to stand. The biggest issue we are dealing with is keeping the fluid/pressure in her brain at an appropriate level. As we learned today, she has to be very careful if she sits up or else she will start feeling icky.
Posted by Hollis at 9:39 PM 2 comments:

Hollis more alert today, looking around her room and seeing who's there. She found Mom, and reached up for a big hug and wouldn't let go. That's OK - I didn't want to let go either.
Posted by Hollis at 11:50 AM 2 comments: