My husband was one of a couple hundred nuts who jumped into the Atlantic at Revere Beach today, to support the Special Olympics. His team, the "r'EMARC'ables", (Eastern Middlesex ARC), raised over $12,000. There were 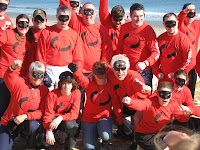 kids from Revere High School, Tufts Women's Rugby, Worcester Polytechnic Institute and many other groups. It was 25 degrees today, with a water temp of 38 degrees. Damien's response after he came out of the water was, "It was fine until my head went under; I think I drank a gallon of Revere Beach water", from the shock. There was enough snow and ice on the beach that they actually had to truck sand onto the beach so folks wouldn't slip. It's been a tough winter!

He IS nuts! In a wonderful way!