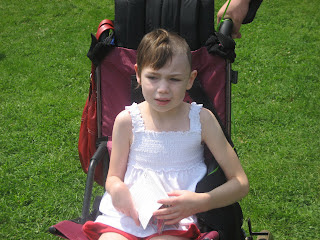 We decided to take a break from pools/beaches today, and went up to Salem, MA, with the intention of going to the Peabody Essex Museum, one of Hollis's favorite spots to walk. When we got to Salem, we found some sort of festival on the common, so we decided to check it out. It was "Culture Day", and it appeared to be a combination of whatever didn't fit into other categories, plus a little, "there must be something on the common on a weekend - what should we do?". Upon our arrival, there was a dance troupe called "Sisters in Dance", and they were belly-dancing, which Hollis thought she should be doing too.
Hollis loves to dance, and will do so at any opportunity, and doesn't understand the concept of "upstaging" or "stealing thunder". For instance, last summer, when Hollis was a flower girl in my friend Trina's wedding, we had a hard time keeping her off the dance floor, even during the bride's first dance: we had to physically restrain her. When I told Hollis she'd have to wait her turn for her dance today, she responded with her angry Marge Simpson imitation, which she developed herself, by the way, not through seeing it on television. She finally got her opportunity, and walked around rather than dancing, which I would definitely call a sulk. ; )
Posted by Hollis at 4:17 PM